Welcome to my Feltmaking Blog . Here you will find some of my work ans inspirations

Photos from the garden in spring


In this selection of Photographs I explore the concept of nuances of light and shade .


Light and shade are natural occurrences, but can be used to create  atmosphere, texture and  give character   in photography. 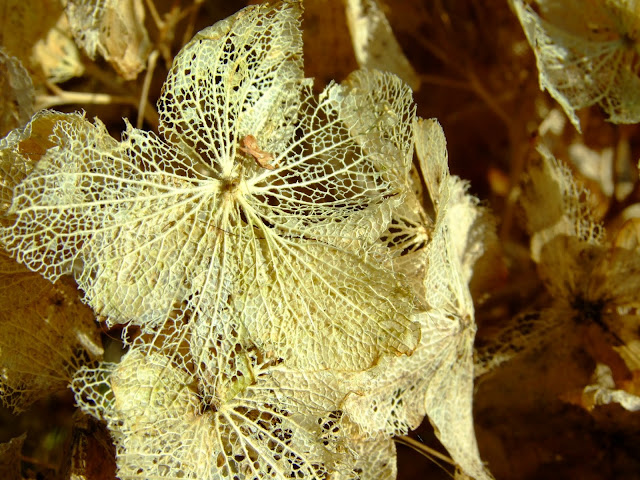 Most of my photos are still lifes using natural light, often strong sunlight for maximum effect.


The objects I chose to photograph were placed  in such ways  as  to focus on  their texture and   the  shadows they cast. 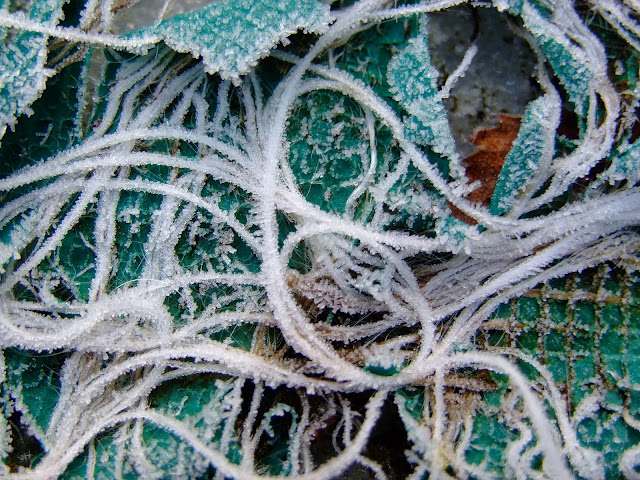 Some Photos were taken in natural settings but with emphasis  on  catching shadows or texture and shade. I chose objects  found in my garden 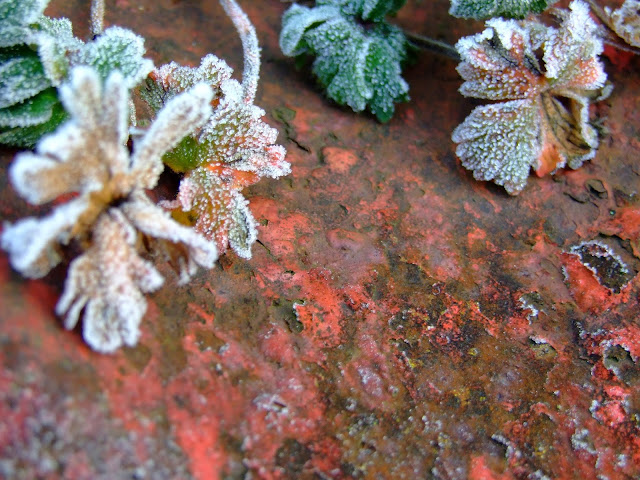 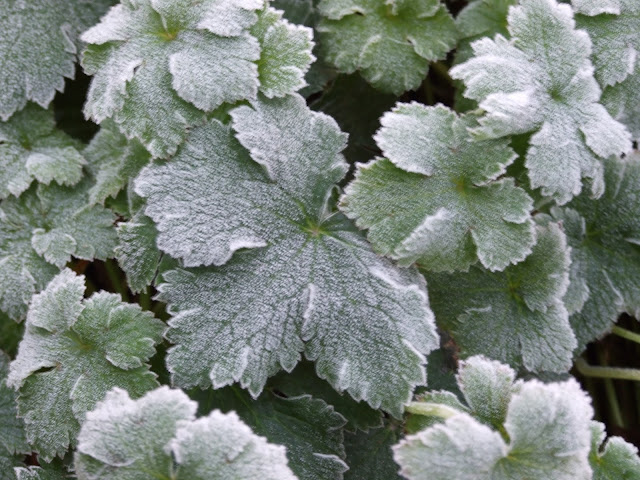 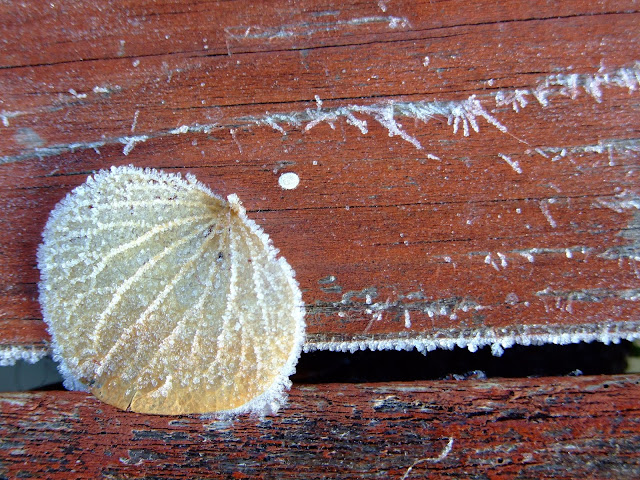 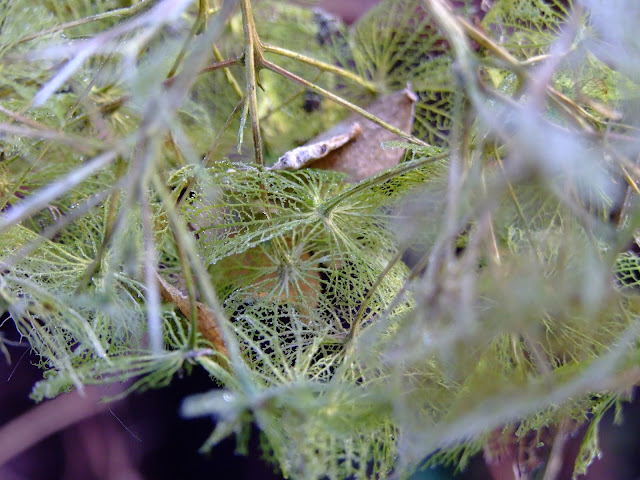 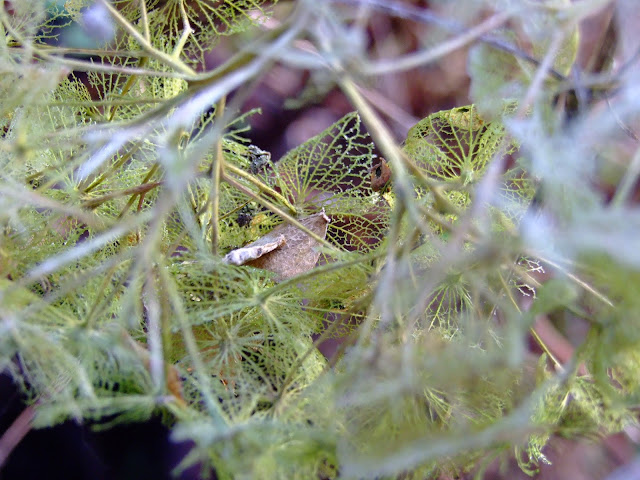 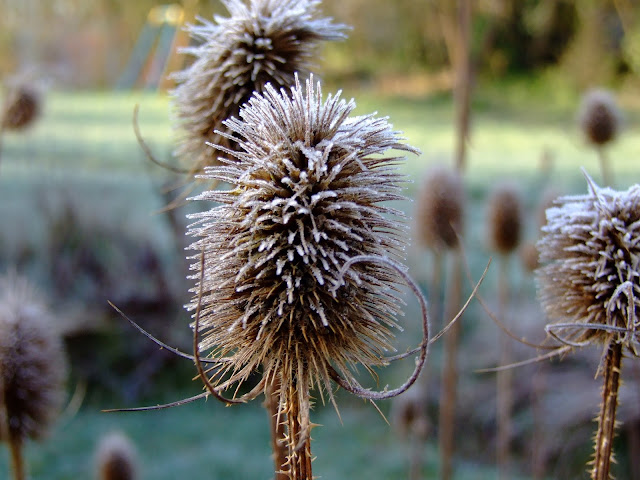 Posted by FineFibre at 1:25 PM No comments:

I have been delivering CRAFTed projects for the past 5 years and have enjoyed every one of them so much. It is a treat working with the  pupils and teachers of the various schools. Brilliantly organized under the umbrella of the Counties Educational Centres and the Design, Craft Council of Ireland.
The latest project I worked on was with 33 children aged 9 - 12 in Burnchurch NS a small and vibrant school situated in the heart of rural Ireland

The overall  theme for this project was global citizenship and recycling. As this is  quite a  broad concept  we decided to narrow it down by looking at  pollution of the oceans  paying special attention to the large garbage gyres floating in major  world oceans, drawing the children’s attention to marine life and how plastics can affect their habitat.
The children were  asked to collect plastics and bring them into school for the project.
I thought it would be exciting to combine stitch, weave and fibre with plastics in this project. 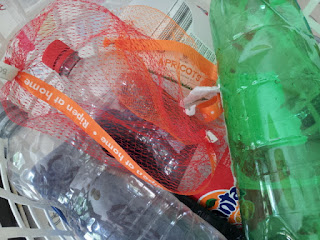 For the introduction  to this project the children saw a short video called "One Plastic Beach" - Richard Lang and Judith Selby Lang  an inspiring video.
We then looked at marine life affected by the pollution of the oceans, with the help of the school’s library and the internet.  In preparation for a session of printing the children were asked to draw a  sketch  of sea life .
This image was used for  monoprinting . We first  made a background print using 2 colours and some mark making  on which  we later  printed the image of the sketch. 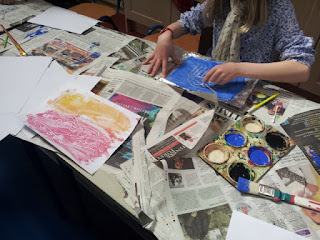 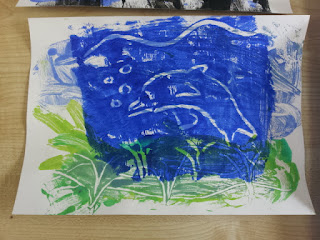 Next the  children transferred  their image of the marine creature  to a piece of plastic collected earlier.
The plastic shapes were then prepared according  to the children’s ability for stitching or  weaving  and worked on in school . It was great seeing the children and their enthusiasm in applying themselves and finishing their pieces using embroidery yarn, wool and beads. 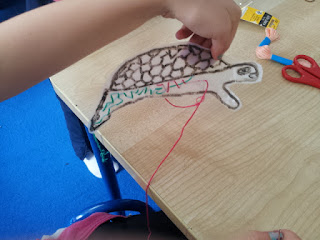 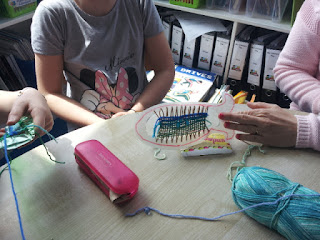 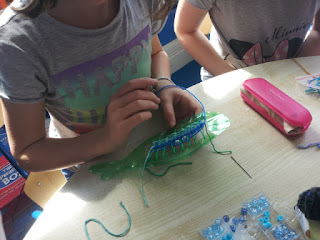 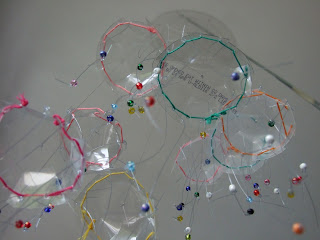 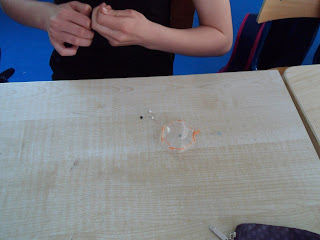 The canvas used as a background was painted with a wash of acrylic colour by the children. All the elements were placed  and arranged by the children and then glued to the canvas. 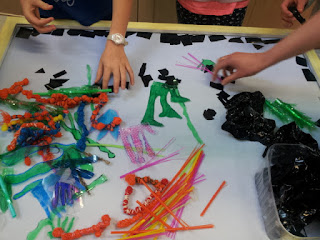 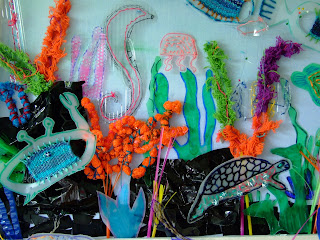 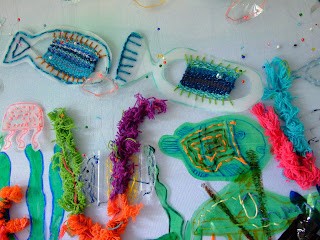 Finally during art lesson the children used their sketches for clay modelling. 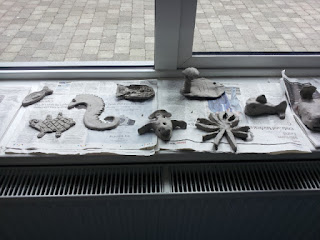 Thanks to the teachers and pupils of Burnchurch NS, Kilkenny Educational Centre and the CRAFTed team Design and Craft Council of Ireland.

Posted by FineFibre at 4:19 AM No comments:

Its been a long time since I have been blogging. Here are some photos . Starting with a neckpiece"squaring the triangle" I made using chiffon silk and very fine merino wool. It was shown at Castle Ward , Co.Down, and at Space CRAFT, Belfast 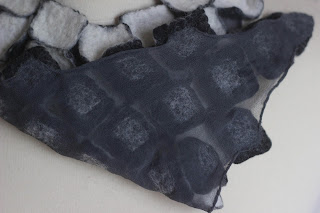 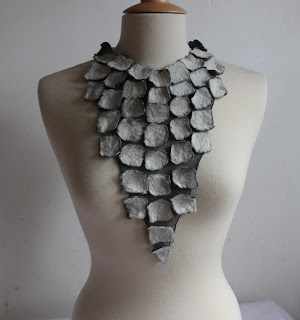 Posted by FineFibre at 7:42 AM No comments: 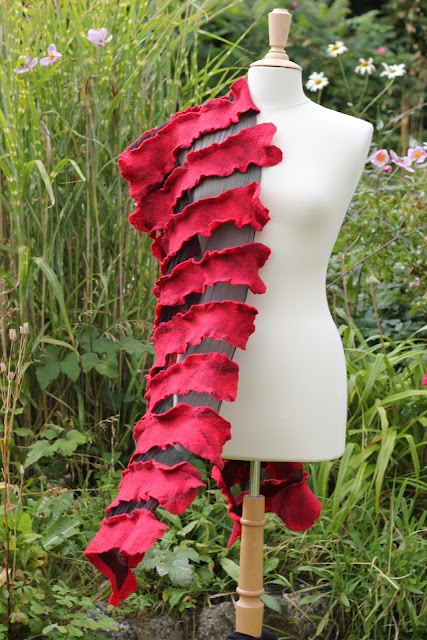 CRAFTed - the making of a felt wall hanging in the classroom 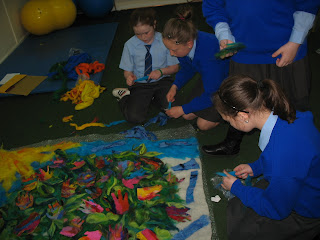 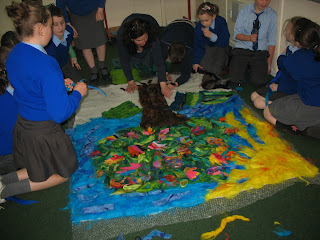 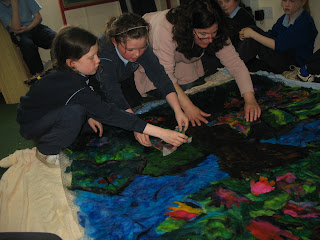 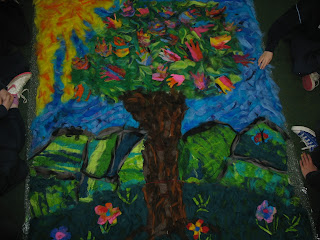 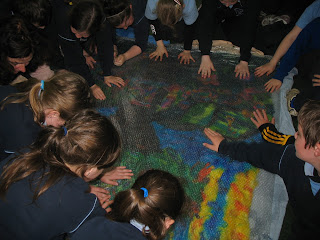 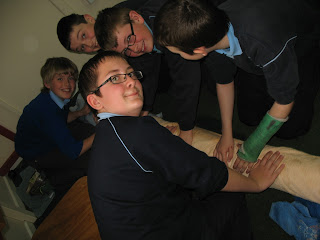 For this years  CRAFTed I had 4th class from Scoil Bhride,  Paulstown, a country school about 20 km from Kilkenny city.
In order to get used to felt making   each child was to make their own felt picture  of their own design ,  only condition   to use as much colour as possible . The children enjoyed  the colours and what  happy amazement  when their laid out wool fibres turned into a piece of felt . They made tractors and lions, sunsets and rainbows, golden beaches and  the sea, and some wrote their name in colourful felt.
On my second visit I was overwhelmed by the happy welcome I received on my return and from then on every time I came back was greeted by children from the class welcoming me  the minute I got out of the car  offering their help to carry in the felting equipment.
The plan was to create a large wall hanging in time for the opening of the new school extension.
Now it was time to make some prefelt in preparation for our wall hanging. Children were divided into groups in order to make prefelts in shades of the dominant colours of the large piece.
For our 3rd workshop with  the help of their  teacher  the children  prepared cut out handprints  of their own hand  and also of the hands of pupils from other classes , involving the whole school  in our project.
These were then traced on a multicoloured  prefelt  and cut out, acting as the blossoms for our “welcoming tree”. We recreated features of the local landscape  and natural environment and at the bottom added the name of the school by laying out fibre and adding the coloured  prefelts prepared beforehand.  Everybody took part in wetting and rolling the large piece which is now happily displayed in the school hall.
It was a great experience and a real pleasure to work with the children of 4th class Scoil Bhride, and while their teacher was very good at maintaining a healthy level of discipline the children   never lost their natural enthusiasm and spontaneity  and I hope the wall hanging  resembles  just  a bit the bright , joyful  and vivid children I worked with .

Posted by FineFibre at 5:52 AM No comments:

Promote Your Page Too